Writing on the heels of a tragic moment in our story. On so many levels.

On Memorial Day 2020 a black man named George Floyd was murdered in our city, by a policeman and the system who birthed him.

On top of the highest unemployment in recent times, on top of a killing pandemic. The fires rage unchecked.

I’d been holding it together, sort of.

Then came the little thing.

On Friday I was preparing to guide a community Tonglen meditation for grief and healing. Prior to this my partner and I stopped to get some food. As is now the custom we pulled up in front of a cafe, brought up the menu online, decided what we’d like and gave them a call to place the order. Halfway through ordering the girl said wait a minute…there was a bunch of discussion on her end and she came back on to say she was so sorry but the kitchen closes at two. She thought she could squeeze our order in but the cooks said no, it was 2 o’clock.

Right there in the car at the curb I began sobbing. Uncontrollable. Snot running and the whole nine.

Michael my partner initially leapt to wanting to help to quickly understanding all he needed to do was listen.

Listen to the litany of little and big traumas I was experiencing to come pouring out. With my tears came all the sadness, grief, frustrations, and fears of these past months. All the lost moments of normalcy like going out to lunch with my boyfriend, or dressing up, or going to work.

All the big stuff. The ugliness, the legacy of hate and racism in this country, the thousands of lives and jobs and businesses lost. Ruined gone.

It all came out, and I let it flow. The water element released through tears cleansing and good.

We are all standing under the awning of this Big Thing. As the rain pours down and collects in its pockets there is bound to be a break in the dam.

We have just experienced a Tsunami of painful energy it has flooded our city and souls. Allow for the tipping point in the break of your own carefully constructed dam. It may just come when the kitchen is closed. 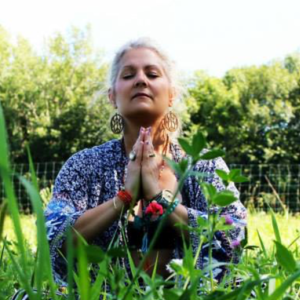 Greta Walch is a seeker who owns and teaches at The Whispering Cave. An intimate Yoga studio with a Salt Cave located in Wayzata Minnesota. Greta and her business partner Michelle Henkel are dedicated to lifting up the collective consciousness through authentic expression and word. Both women see and feel the hunger within society, particularly women, to be at home with their hearts and once coming home, to be free to sing. Greta guides souls home to themselves through yoga, meditation, connection and sound. She is humbled to offer her words and thoughts up to the Universe, hoping her journey can connect and inspire yours.